Write It and They Will Come by Donna L Martin #ChaBooCha

In 1989, actor Kevin Costner starred in a movie about an Iowa corn farmer who heard voices. They whispered, “build it and they will come.” He thought they were telling him to build a baseball diamond in his fields. When he finally did, magic happened, and the 1919 Chicago White Sox came out to play.

FIELD OF DREAMS fueled my imagination when it was released. I loved that movie. Not only does it portray America’s favorite summertime sport from a bygone era, it can give writers the incentive to create their own dream of becoming a published author.

At first, Kevin Costner’s character ignored that inner voice. At times, he even doubted what he was doing. It seemed a little crazy. But every good idea starts with a spark…a dream…a nugget of something nibbling at the back of your mind. Back in 2014 I was a READ TO ME volunteer at a local elementary school. That year I tutored a second-grade girl who struggled with reading comprehension. Working with her, I got a spark. An idea for a story about a young girl who came from a long line of “story catchers”, but who had trouble “catching” her own stories. Later that year I participated in Tara Lazar’s PiBoIdMo (Picture Book Idea Month…later renamed Story Storm) where I developed that nugget of an idea into a picture book. Fast forward through a year of working on that manuscript, receiving critiques, and editing until I entered THE STORY CATCHER into a contest where it was seen by the editor of a small publishing house. In January of 2015, my debut picture book was born. Writers need to listen to that inner voice whispering to them, the one that says to take a chance with their publishing dreams.

While working to convert his corn fields into a baseball diamond, Kevin Costner’s character ran into many obstacles. Having to deal with people who thought he was crazy. Trying to track down others to convince them his dream could become their dream too. Later in 2015, I came across a Google image that stopped me in my tracks. One look at a ship sailing toward a moonlit horizon and the idea of LUNADAR: Homeward Bound was born. I couldn’t get the picture…or Ariana’s story…out of my mind. I played around with the prospect of writing a young adult fantasy novel for at least six months until NANOWRIMO (National Novel Writing Month) in November of that year challenged me to get serious about my story. I completed the first draft that month but set it aside for almost another two years while LIFE got in the way. But good stories have a way of whispering in a writer’s ear to come back to them, so in 2017 I got serious about that manuscript. After polishing it, I sent out queries to dozens of agents and received dozens of well-meaning, mostly encouraging, rejections in return. Does that mean LUNADAR wasn’t worthy of being published? Not necessarily, so after much research into the publishing side of writing, I decided to pursue an indie route. My company, STORY CATCHER PUBLISHING was born and LUNADAR was released in October of 2018. Writers need to be fearless about believing their stories are worth fighting for, especially when you want to give in to self-doubt.

In the end, Kevin Costner’s character built the field of his dreams and in the process, he planted the seed for an even bigger dream. As writers, we never truly know when good things will come our way. Like the fact Becky had enough faith in me as a writer to ask me to participate as a guest blogger in this year’s ChaBooCha event.

But I DO know one thing.

NOTHING will come our way if we don’t try. Sometimes we get knocked down by rejection letters, writer’s block, or even our own self-doubt, but serious writers get back up, and brush themselves…and their bruised egos…off. They get back to the writing. I firmly believe in the “write it and they will come” philosophy. No harm will come for letting my writerly dreams free rein. But what MIGHT happen is the realization of an even more fantastic dream than I could have possibly imagined. And isn’t that what writing for children is all about? Creating a legacy with our words that will last long after we’re gone?

International best-selling, award-winning author, Donna L Martin, has been writing since she was eight years old. She is a 4th Degree Black Belt in TaeKwonDo by day and a ‘ninja’ writer of flash fiction, children’s picture books, chapter books, young adult novels and inspirational essays by night. Donna is a BOOK NOOK REVIEWS host providing the latest book reviews on all genres of children’s books, and the host of WRITERLY WISDOM, a resource series for writers. Donna is a member of the Society of Children’s Book Writers & Illustrators. Her latest book, LUNADAR: Homeward Bound, can be purchased through Amazon, Barnes & Noble, and other online retailers. She is a lover of dark chocolate, going to the beach and adding to her growing book collection. 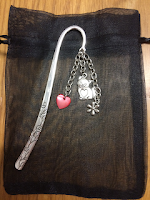 I (Becky) make metal charm bookmarks. The above picture is just one example of one of my bookmarks. Today's give-away is one of these charm bookmarks. It will not necessarily be the same as the one above as I make them from different charms and different bases on a frequent basis. (I also do themed-ones for specific books.)

Comment on this post, and, if you are a signed-up member of the challenge, you will  get one entry into the drawing which will be done using a random number generator to choose one person to win a hand-made charm bookmark by me.
Posted by Becky Fyfe at 05:38