I took all of the votes off of Facebook, through e-mail and here in the comments and totalled them together.

The final vote was:

That left me with the tie-breaking vote. This was hard for me, because I actually believe very strongly that the first 3 covers were closer in style to the original two Teapot Tales anthologies, so I am kind of sad that none of them won the vote. So, as the vote was between the last two covers, #4 and #5, I decided to take many things into consideration, including aesthetics, fitting in with previous anthologies styles, and how the colour of the background will look when printed. #5 has the trees which are more like previous anthology covers, BUT the colour was much brighter and glaring than previous covers, which had more muted colours. (Yes, I printed the two covers up to see how they'd look on glossy paper.) In the end, after much consideration, I voted for:

So that means that the new cover for Teapot Tales volume 3 is: 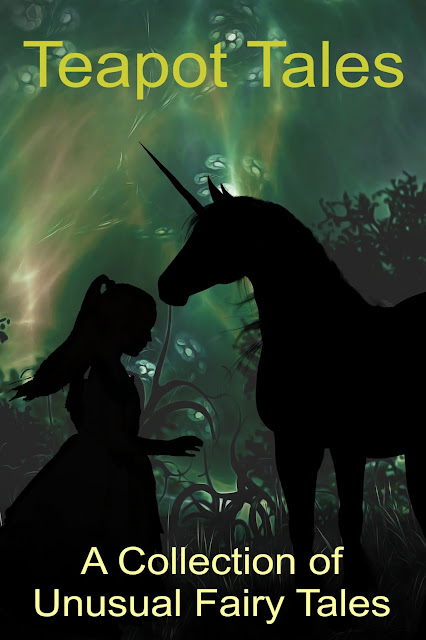 I'm still a little bit torn because we had an equal number of votes between each. (I really thought one would win out over the other.)

I was thinking that I could make an extra anthology as an extended version with a couple of extra stories in it and some extra pictures, using one of the covers, while using the other for the non-extended version. (That would mean more work for me though, as we have very few pictures at the moment!)

I'd love everyone's thoughts on this. If you voted for the #5, did you have your heart set on it? Would you like an extended version to be available, so that both covers could be used?
Posted by Becky Fyfe at 03:01