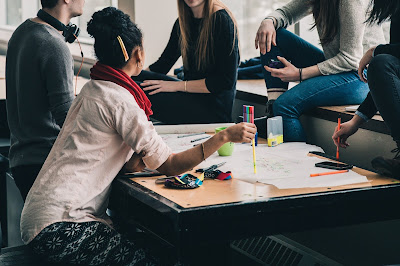 Hi, I’m Aleesah Darlison. I’m a multi-published, award-winning Australian children’s author.
In the last six and a half years, I’ve had thirty-six books commercially published, including my eight book fantasy adventure series, Unicorn Riders, which has just been released in the US.

But… ten years ago, I knew nothing and no one in the children’s publishing industry. I was as green as they come!

What was one of the best things I did to get my career on track?

It was to create a children’s writers critique group – well, two groups, to be precise.

So what happened, was that I knew I wanted to be an author. I worked out that I would have to skill myself, teach myself, how to write properly. As you probably already know, writing for children isn’t as easy as people believe.

I went along to a number of writing workshops that were being run by well-known children’s authors.
The first workshop was an introductory course on writing for children with Dianne (Di) Bates. Di has won many awards both for her writing and her services to children’s literature. It was Di who encouraged the attendees at her workshop to connect and form a critique group. I collected everyone’s contact details with the intention of doing just that.

At around the same time, I attended a workshop that was run by Libby Gleeson. Libby is a much-loved Australian children’s author. She’s won plenty of awards too and was also presented with a Member of the Order of Australia (AM) in the Queen’s Birthday honours in 2007. Huge kudos.
At Libby’s workshop, I met and networked with more aspiring and emerging authors. We had much in common including our need to continue our education as authors and our desire to be published.
I collected more contact details. Now all I needed was a venue. That’s when I got in touch with the NSW Writers’ Centre (another fabulous resource for authors in Australia!) and asked them if they could provide a room for us to meet. They happily did so – and it was free of charge and central to everyone. We were living in Sydney in the time, a huge city, so a central venue was crucial.

From that point on for several years I coordinated and chaired two separate critique groups. One group was for picture book authors only. The other was a broader group of children’s author of all age groups/genres.

There were about six to ten of us coming every fortnight, although we had a much larger database of people. Not everyone could attend every week.

We had a list of rules that we tried to live by. No personal or confronting feedback, constructive feedback on manuscripts only. Everyone has a turn. Try your best not to defend every comment made or justify every word written – the author being critiqued really needed to listen more than they spoke, otherwise the feedback ended up falling on deaf ears.

So, why was it so crucial at the start of my writing career to be part of a critique group? Some clear reasons, in a nutshell included:


Of course you’re not going to agree with every item of feedback you receive. There are matters and stories that are close to your heart and you may consider that what you’ve written – and how you’ve written it – is right and true and correct. You may consider that your story is as precious as The Holy Grail. And yes, authors do get precious about their work. We spend countless hours lovingly creating our stories, after all.

But writing is an incredibly objective thing. Listening to other people’s opinions and taking on-board how they have heard or read you work is crucial to the story’s development. It’s also crucial to your development as an author. Once you’re published, don’t think that for one moment the feedback is going to stop. You have to learn to have a thick skin, but also to listen to people dissect your writing as they find their own truth and meaning in it.

As time went by, the members of both my writers’ groups developed their skills. Those picture books, chapter books, novels and short stories that we were reading out, well, many became published in magazine and in book form.

Several of the people I started with in the critique groups are now multi-published authors. We still walk the path together and while we might not be critiquing each other’s work (many of us have agents and editors who do that for us now) we still support each other. 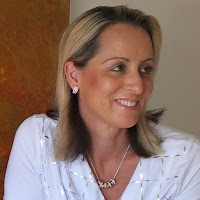 Aleesah Darlison is an award-winning Australian children’s author. To date, she has published thirty-six books for children including picture books, chapter books, novels and series. Aleesah has won numerous awards for her writing including the 2015 Environment Award for Children’s Literature (Non-Fiction) and an Australian Society of Authors (ASA) mentorship.

Aleesah travels throughout Australia and internationally delivering talks and workshops to children and adults at preschools, schools, libraries, literary festivals and writers’ centres. Her 8-book fantasy adventure series, Unicorn Riders, has been released in hardcover and paperback in the US. In 2016, Aleesah set up a business called Greenleaf Press, which provides critical support services to authors, illustrators and small businesses. 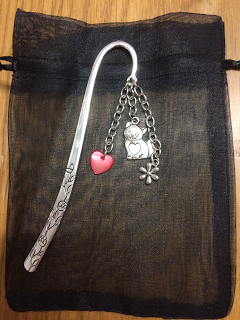 Today's give-away is a hand-made mermaid charm bookmark (different from the one shown in the picture; pictured is a cat charm bookmark). Just comment on this post by September 30th to be entered to win.