Childhood Inspirations: How My Own Children Shape My Chapter Books by Kimberly Kinrade #ChaBooCha 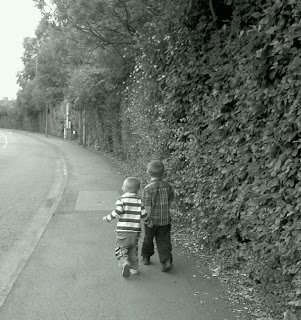 Childhood Inspirations: How My Own Children Shape My Chapter Books
by Kimberly Kinrade

In 2007, a simple survey was conducted that showed that 9 out of 10 elementary aged kids are bullied at school, and 6 out of 10 have bullied others. I’m not sure what the current stats would show, but I’m guessing it’s not going to be lower. I know many schools have an anti-bully policy, including the school my own girls go to. I also know my kids still come home hurt or sad or scared about bullies hounding them.

When I set out to write the first three books in The Three Lost Kids series, I wanted them to be fun fantasies, but also relevant to the issues my own girls face. Each book is based on one of my children, and their challenges and struggles helped shape the storyline and themes present in the books.

In Lexie World, my then-5-year-old Lexie kept getting into trouble for leaving her stuff outside or leaving trash on the ground. She loves the earth and nature, so it saddened her to know that her actions were hurting the earth. We talked about what challenges Lexie World would have and came up with the Garbage Goblins, destined to destroy the world if Lexie and her sisters couldn’t break the curse and stop them.

On this journey, the character, Lexie, had to face her own behaviors and decide what she was going to do about the litter she and others had caused. The real Lexie also took a journey while reading this book, as I hope you and your children will. She learned important lessons about herself and caring for the planet, all wrapped up in an exciting story.

In Bella World, my then 8-year-old had to face the Dragon Fire in her that often burns other people. She had to look at her tendencies to horde her belongings or take things that don't belong to her at all. As she entered her magical namesake world, she met a Dragon who had many of the same struggles as Bella. Together they learned how to treat others, and they grew emotionally as a result.

Maddie World is the third book in this special edition, fully illustrated trilogy. My own Madelynne, who is now 10 years old, is most impacted by bullying at school. It’s hard for her, and she’s had times where she didn’t want to go to school at all. It breaks my heart to see my girl hurt like this, and I also know that she needed to learn to own her own strength and stand up for herself–without becoming a bully too. Thus Maddie World was conceived. In this story, a Fairy War is destroying Maddie World. The Lava Fairies have bullied the Bubble Fairies for too long and the Bubble Fairies are fighting back, but now they’ve become the bullies they so hated. Maddie has to face her fears, and be braver than she’s ever been, if she wants to save her sisters and her world.

The first three books were so popular with my kids, and others, that I wrote another special trilogy of holiday books featuring The Three Lost Kids. Once again, life lessons are incorporated into a fun fantasy adventure where they save a dying Sugar Fairy, break a Christmas Curse and rescue Cupid from a monster!
My girls learned about the outlining process, story building, plot and character development and editing as I wrote these books. Now, our real life Lexie is becoming a writer and spends several hours a week (sometimes a day) typing on my laptop. Her first story, over 4,000 words long, is "None of Your BEESWAX." I think she's also working on a story involving a machine that turns people into dogs and cats.

I can't wait to someday share her stories with you.

In the meantime, you'll have to settle for mine.

It’s my hope that this series brings important lessons to kids without being heavy handed–that they learn, within the pages of fantasy, how to care for their world, grow emotionally and stand up for themselves.

What struggles do your children have and how do you help them through it as a parent? 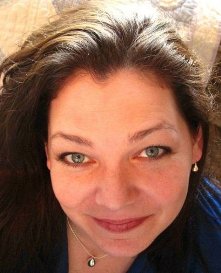 Kimberly Kinrade was born with ink in her veins and magic in her heart. She writes fantasy and paranormal stories for children, young adults and adults and still believes in magic worlds.  Her most popular series include The Three Lost Kids, The Forbidden Trilogy and the Seduced Saga, all available on Amazon and other online retailers. She is also the co-owner and marketing director of Daring Books Design & Marketing. She lives with her three little girls who think they’re ninja princesses with super powers, her two dogs who think they’re humans, her two cats who think they're gods (and probably are), and her husband, also known as the sexy Russian Prince, who is the love of her life and writing partner.
For a list of her books, check out: http://Amazon.com/author/kimberlykinrade.
Find Kimberly Kinrade
Website     Twitter     Facebook     IPI Twitter     IPI Facebook   IPI Website Three Lost Kids Website   Daring Books Design & Marketing Website 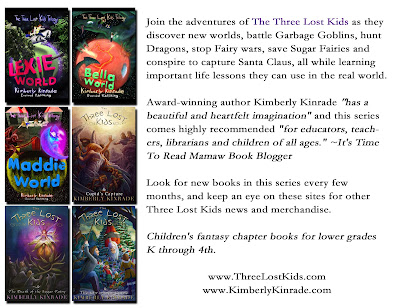 Kimberly has very generously offered two prizes today, an e-copy of "Lexie World," and an e-copy of "The Three Lost Kids & Cupid's Capture." All you need to do to be entered into the drawing for the prize, if you are already a signed-up member of the Chapter Book Challenge, is to leave a comment on this post before noon GMT on the 30th of March. The two winners, one for each book, will be announced on the 30th. If you already have the book, you may choose to gift it to someone else in the challenge. In addition, if we get more than three comments on this post, I am offering one commenter the chance to win a print version of "The Three Lost Kids & Cupid's Capture." So that makes three prizes available to win by three separate people. The e-books will be chosen by random number generator in the order that they are mentioned and then the print copy will be chosen the same way.
Posted by Becky Fyfe at 05:08