First day of the challenge! - and our preliminary guest post line-up #ChaBooCha 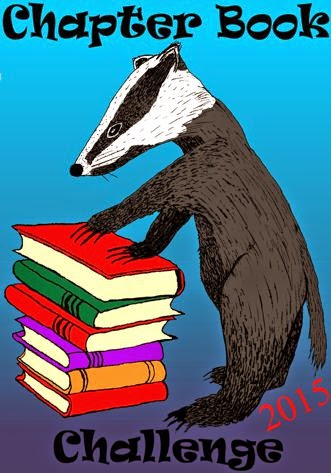 It's the first day of the ChaBooCha. Are you writing? Do you already have your idea lined up and your story planned out?

We'll be covering a lot of topics this month, some of which have been covered in previous Chapter Book Challenges but from different authors (so with different perspectives), and some of which will be new topics for you to learn from.

We have a terrific preliminary line-up of guests who will be posting this month, some of them you will recognize immediately. (I'm not sure how I'm going to top this year's guest line-up for next year's challenge, but if anyone knows Neil Gaimon or Meg Cabot and can get them to agree to guest post for us next year, that would help. lol!)

Why is this just a "preliminary" line-up? Well, because a few big name authors have told me they are going to check their schedules and see if they can post for us, and I am still waiting to hear back from them. If I hear back soon, then I will be adding them to this line-up. There are also a few authors who have posted for us before who I have yet to get in contact with, but plan to ask to join us yet again. This list is just a preliminary one until I can finalize it with these last details.

Preliminary line-up of guests who will be posting for the 2015 challenge (in no particular order):


Tamora Pierce - New York Times and Wall Street Journal bestselling writer Tamora Pierce has written 29 books of fantasy for teenagers, a short story collection, an original audio book, radio plays, comic books, and articles.  Her books have been translated into many different languages and are available on audio. Her works have been ALA Best Books for Young Adults, YALSA Best Books, and NY Public Library Books for the Teen Age.  She was also named the 2013 Margaret A. Edwards Award winner for her Song of the Lioness and Protector of the Small quartets.  She lives with her Spouse-Creature, two parakeets, and many indoor and outdoor cats in Syracuse New York.

Lee Wardlaw (guest post) - Lee Wardlaw has published close to 30 books for children, tweens and teens, selling more than one million copies world-wide. Lee's newest books include: WON TON - A CAT TALE TOLD IN HAIKU (Holt, illustrated by Eugene Yelchin), recipient of the 2012 Lee Bennett Hopkins Children's Poetry Award and the 2012 Myra Cohn Livingston Children's Poetry Award, among others; RED, WHITE AND BOOM! (Holt, illustrated by Huy Voun Lee), a CCBC Best Books of the Year and a Parents' Choice Award "Recommended" Book; and 101 WAYS TO BUG YOUR FRIENDS AND ENEMIES (Penguin), winner of the Forward National Literature Award for Humor. She has a degree in education. She has 30+ years experience presenting lively and interactive writing programs in grades K through 8th. Since 1988, she has also taught a variety of workshops and classes for educators, librarians, parents and aspiring writers. Lee's books have been honored by the American Library Association, the International Reading Association, the Children's Book Council, the National Council of the Social Studies, the National Council of Teachers of English, Bank Street College of Education, the International School Librarians Association, and more.

Patti Larsen (guest post) - Patti Larsen is an award-winning middle grade and young adult author with a passion for the paranormal with well over 20 novels published. Her most recent book, "Girl Incredible," is available from March 3rd this year.

Yvonne Navarro (guest post) - Yvonne Navarro has written around a hundred stories, most of which have been or are scheduled to be published. Her first novel, "AfterAge," was published in 1993 and was a finalist for the Bram Stoker Award for Superior Achievement in a First Novel. In 1995, her second solo novel, "Dead Rush", was published, and it also was a finalist for the Bram Stoker Award, this time in the category of Superior Achievement in a novel. "Final Impact," the third solo novel, was published in 1997, and won both the Chicago Women In Publishing's Award for Excellence in Adult Fiction and the "Unreal Worlds" Award for Best Horror Paperback of 1997 from the Rocky Mountain News. Since then she's published several more solo novels, "Red Shadows," "Dead Times," and "That's Not My Name." "That's Not My Name," "Buffy the Vampire Slayer: Paleo," and "Buffy the Vampire Slayer: The Willow Files, Vol. 2" all won at the Illinois State level of the IWPA 2001 Mate E. Palmer Communications contest (two first place and one second place, respectively), plus she swept all three awards of the Short Story category with "Ascension," "Divine Justice," and "Santa Alma." She's written a number of media tie-in novels, including several Buffy the Vampire Slayer novels, Hellboy, Elektra, and Ultraviolet.

Adam Wallace (guest post) - Adam Wallace has written and published more than 20 books for children, including The Better Out Than In series, The Pete McGee series, the Rhymes With Art - Learn Cartooning the Fun Way series, "The Share-a-not," "Mac O'Beasty" and "The Negatees."

Darren Shan (interview) - Darren Shan's Darren Shan's real name is Darren O'Shaughnessy. His initial breakthrough in publication was with an adult book, in 1999, titled Ayuamarca (since re-released in the UK as Procession Of The Dead, and coming to the USA in 2010). In January 2000, his first children's book, Cirque du Freak, which he'd written as a fun side-project, was published. The first book in a series titled The Saga of Darren Shan (or Cirque du Freak, as it's known in America) attracted rave reviews. Shan loved writing for children so much, that for the next several years he focused exclusively on his books for younger readers. First, he wrote a total of 12 books about vampires. He quickly followed up his vampiric saga with The Demonata, a series about demons. Running to ten books in total, The Demonata cemented Shan's place in the UK as the Master Of Children's Horror, and saw him score his first UK #1 bestseller. He also wrote a one-off short book, called Koyasan, for Wold Book Day in the UK. There was a very successful manga adaptation of Shan's vampire series, drawn by the Japanese artist, Takahiro Arai. It was originally serialized in Japan, but collected volumes are now on sale in the USA, UK and other countries. In addition to writing for children, Shan has now returned to his first love and is once again writing for adults as well. He has had two adult books published in the UK, Procession Of The Dead and Hell's Horizon. They have been released in a number of other countries too, and are due to hit the USA in 2010. A third, City of the Snakes, goes on sale in the UK in March 2010. His first adult books were released under the name of D B Shan, but they are being reprinted under the name of Darren Shan in March 2010, and City of the Snakes will be released under the Darren Shan name. By the start of 2010, Shan's books were on sale in every continent, in 39 countries, in 31 languages, and have been children's bestsellers in America, Britain, Ireland, the Netherlands, Norway and other countries. The books have topped adult bestseller charts in Hungary, Japan and Taiwan. In total, Shan's books have sold close to 15 million copies worldwide! The movie rights to Cirque Du Freak were bought by Universal, and the first movie (which combines elements from the first three books in the series) was released on October 23rd, 2009, starring newcomer Chris Massoglia as Darren Shan, along with a wide array of established stars such as Josh Hutcherson, John C Reilly, Salma Hayek, Willem Defoe and Ken Watanabe. The movie was called Cirque Du Freak: The Vampire's Assistant. It was released on DVD and Blu-Ray in February 2010.

Amanda Hocking (guest post) - Amanda Hocking writes young adult urban fantasy and paranormal romance. Her New York Times best-selling series the Trylle Trilogy has been optioned for films. She has published fifteen young adult novels, including the Hollows and the Watersong series. Frostfire - the first book in her newest trilogy, the Kanin Chronicles - is out now, and the second book - Ice Kissed - will be out May 5, 2015.

Wendy Orr (guest post) - Wendy Orr writes for children, young adults and adults. Her books have been published in 25 countries and languages and have won awards including the CBC (Australian) Book of the Year, American Library Association Book for older readers, and the Israeli March of Books. Wendy also worked on the screenplay that turned her book Nim’s Island into a 2008 Hollywood feature film starring Jodie Foster, Abigail Breslin and Gerard Butler. The sequel, Nim at Sea, is now in production, with Bindi Irwin starring as Nim. Her latest books are: (in Australia) The Nim Stories, illustrated by Kerry Millard, Allen & Unwin, (in Canada) Facing the Mountain, Scholastic Canada,  (in USA) DISCOVERED: A Beagle Called Bella, illustrated by Patricia Castelao; the 6th book in the Rainbow Street Shelter series, Henry Holt.

Harold Underdown (will be sharing an excerpt from his book "the Complete Idiot's guide to Publishing Children's Books") - Harold Underdown is an independent editor; he does critiques, helps to develop manuscripts, and provides other editorial and consulting services for individuals and publishers. Harold enjoys teaching wrote "The Complete Idiot's Guide to Children's Book Publishing.". He founded and runs "The Purple Crayon." He speaks and gives workshop through the Highlights Foundation, SCBWI's national and regional conferences, and Kid's Book Revisions. As an in-house editor, he worked at Macmillan, Orchard, and Charlesbridge, and has experience in trade and educational publishing.

Jackie Castle (guest post) -  Jackie Castle graduated from UT Southwestern Medical Center of Dallas. She is a published freelance writer, storyteller and former elementary school educator. Jackie has published three successful YA novels in her White Road Chronicles series, along with three accompanying novellas. She also has short stories published in a variety of anthologies.